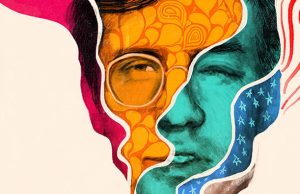 Note: Although this story is a footnote to a footnote of American cultural history, it’s intriguing to yours truly. I took one of those Orange Sunshine tabs more than four decades ago. The experience was life-changing.

Nicholas Sand and Tim Scully wanted to save the world—humanity, to be specific. They did the obvious—manufactured LSD in mass quantities.

Their product became known as Orange Sunshine on account of it was orange and created inner sunshine. Their customers likely numbered in the hundreds of thousands, or more. In The Sunshine Makers Director Cosmo Feilding-Mellen tells of these two men of opposite characters who turned the world on—and, of course, landed in prison.

Scully and Sand tell their respective stories in interview. Sand adds some unsolicited nude yoga during his face time. Feilding-Mellen interviews several other actors in this compassion play, including the undercover officers who had supporting roles.

There is no want of drama, intrigue, action, suspense, and unintentional humor in Feilding-Mellen’s film. That is, you need not be a psychedelic relic to enjoy it, and, especially, to learn this story which may very well be remade as a Hollywood film or, better yet, a mini-series.

The Sunshine Makers is available on Amazon, iTunes, Vudu, Google Play, and Netflix.