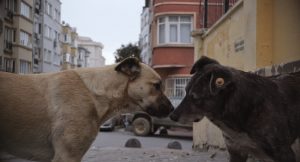 Turkey has a national policy of no-kill and no-capture towards all its stray animals. The City of Istanbul has approximately 130,000 stray dogs. This was not always the case. For decades Turkey practiced mass killings of strays. However, in June, 2004, the Turkish government passed a law requiring local governments to rehabilitate street animals rather than kill them. It requires the animals be sterilized, vaccinated, tagged, and taken back to the place where they were found.

In Stray, filmmaker Elizabeth Lo follows several of these stray dogs. There is no narration. None is needed. There is occasional text, but the dogs tell the story as we follow their lives on the streets and other places. Zeytin, a large, short-haired tan female is the film’s host.

Zeytin takes viewers on a tour of Istanbul including, of course, many stray dogs—and a few stray people some of whom take care of dogs they find and fancy. The film evokes pathos, hope, concern for the dogs, and fascination with this hybrid dogs/people world.

I encourage readers to visit Elizabeth Lo’s Website to learn about her moving body of work, and to read this Interview of the filmmaker.