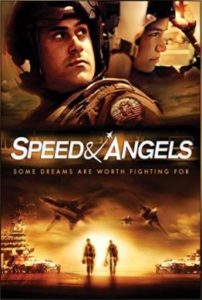 When Jay Consalvi went home from the hospital—at two days of age—his father took the infant flying for 20 minutes before going home. By the time he was five Jay wanted to fly, and by 11, he wanted to be a Navy fighter pilot—although he didn’t know what a fighter pilot does.

Meagan Varley wanted to fly Navy jets since the age of 12. Top Gun was the trigger of that aspiration. Her two sisters are confirmed pacifists—as am I. “It’s kind of extreme,” comments one of the sisters, “when your twin sister’s a fighter pilot.”

Consalvi and Varley became carrier-based fighter pilots, and were deployed to Iraq.

In Speed and Angels director Peyton Wilson tells the stories of these two rare birds from the beginning of their fighter training through their deployment to Iraq. She had the cooperation of the Navy, and captured rare—for public consumption—video and audio footage of aerial combat training as well as the carrier landing practice of our two heroes.

Like so many other documentary features I’ve seen, I wanted much more of the story. I am grateful, though, for being able to see these two stories.

I found Speed and Angels on Amazon Prime Video.

IMDB Reference  (This reference provides a website for the film, but I was not able to access it via Firefox or Chrome. For the record the URL is: http://www.speedandangels.com/ )