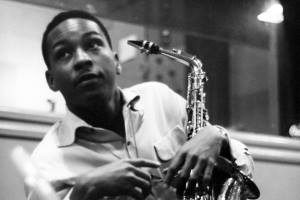 The Kino Lorber Sound of Redemption disc was one of a pile of ten recently-received DVDs. I nonchalantly got to the disc, and found myself unexpectedly moved by this story of a troubled master.

Frank Morgan lived a life of crime, addiction, and incarceration peppered by short or long periods of masterful alto jazz playing. N.C. Heiken’s documentary of this life is as emotional a film as I have seen since beginning my odyssey through the documentary film world. This emotion derives from the many friends, fans, and family members who speak with joy and sorrow about their time with Morgan.

Sound of Redemption is structured around a musical tribute by contemporary jazz masters filmed at San Quentin—one of Morgan’s homes-away-from home. Morgan’s narrative along with experiences and perspectives provided by interviewees paint the stark reality of absent and abusive parents, deeply rooted racism, and a magnificent talent that tore through layers of pain and darkness.

That talent, this beautiful music shines throughout the film, evoking the joys and sorrows of a life lost and redeemed.