The law says that when making a movie or TV show you can only accomplish two of them—only, of course, if you have the ability. Even our Creator couldn’t get all three—as George Burns said in “Oh, God”, “I made the avocado seed too big.” And, of course, He put too many mean genes in our genetic make-up. 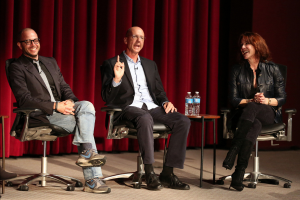 But for every law, there are its breakers. And those breakers are called ‘showrunners.’ Their job is to do just that—make their episodic television shows good, fast, and cheap.

As the number of television networks has increased from one to immeasurable—the internet invites everyone to make their own network—the showrunner has evolved in the television business. The runner meets the needs and, as much as possible, the demands of the financier, writers, crew, and producers—all within a tight timeline. Showrunners have a short ‘use-by’ date.

Showrunners is written and directed by Les Doyle—his first feature—and features interviews with,… well…, you know who. Doyle also takes his camera into writers’ conference rooms.

Joss Whedon and J.J. Abrams are two of the approximately 38 interviews. They speak of their time cutting their teeth in television. They are not alone in their showrunner celebrity. The role of showrunner has become so critical that those who run successful shows have joined the ranks of iconic actors. They appear at fan conventions—on panels, giving autographs, and receiving loud rounds of applause.

Showrunners is available in iTunes, and Netflix. See the film’s homepage to learn of other viewing options.