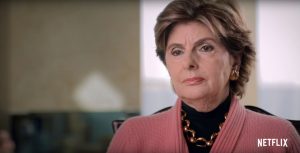 Through either intention or serendipity, the February 9, 2018 release of Roberta Grossman’s and Sophie Sartain’s Seeing Allred is perfectly timed. The issue of women’s rights is reaching deeper into American culture, media, and the halls of corporate/governmental power. The impact of attorney Gloria Allred’s lifetime of crusading for women’s rights has reached into those heights and depths.

The two filmmakers incorporate a brief outline of Allred’s biography, and focus on her accomplishments. In the film’s 90+ minutes we see and hear our heroine present at critical points in the nation’s cultural and political history. Allred’s highly public advocacy for sexual abuse victims and those who have been deprived of civil rights is complimented by her participation in women’s rights policy-making by legislative bodies, and in public protests.

Via the film’s non-stop stream of media appearances, Allred is utterly fearless as she places herself into the glowing white arc of controversy as her indomitable spirit addresses individuals, governments—and her stock-in-trade, media.

I was thoroughly captivated by Grossman’s and Sartain’s film from beginning to conclusion. The editor(s) deserve(s) major credit in producing this engrossing film. His, her, or their names, however, do not appear in the film’s IMDB record.

Seeing Allred is distributed by Netflix.