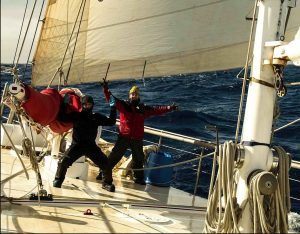 In Sea Gypsies writer/producer/director/cinematographer/editor Nico Edwards takes a ride in the Infinity, a 120 sailing ketch(1.). I write ‘in’ rather than ‘on’ because much of his on-camera narration is done from his room while suffering the effects of motion sickness.

When not ill, Edwards’ cinematography is gorgeous. He captures many moods of the sea and of the ragtag crew on their 8,000 mile voyage from New Zealand to Patagonia—via Antarctica. To make an understatement, Antarctica is the adventurous part.

Infinity is the home of captain Clemens Gabriel who has been sailing the oceans for ten years “on a never-ending voyage of nomadic exploration.” Gabriel has raised four children on the boat. I doubt they all have the same mother. The crew is determined by caprice, and varies from voyage to voyage.

As pelagic documentaries go, Sea Gypsies is a one-off—kinda like watching a drunk guy walk a high wire—and with lots of pretty pictures.

1. From Google: A ‘ketch’ is a sailing craft with two masts. The distinguishing characteristic of a ketch (ketamina) is that the forward of the two masts (the “mainmast”) is larger than the after mast (the “mizzen”). … In modern usage, the ketch is a fore-and-aft rigged vessel used as a yacht or pleasure craft.