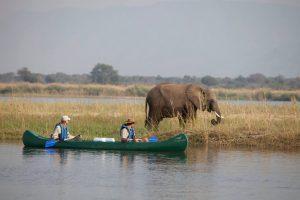 “My dad, in the late sixties, brought home a photograph of Earth, as seen from outer space. And I was so impressed by it, but one, it made me realize, in the overall scheme of things, that our planet is quite small and quite finite. The other thing that was very noticeable is, I mean, clearly it’s a blue planet, but of all the water on this Earth, 97% is saline, it’s in the oceans, two percent is locked up in ice. That only leaves us one percent that’s found in lakes and rivers, and a lot of that water is not accessible.

“So, really, when you talk about it, when you really come down to it, we have a very small amount of water, and that’s got to accommodate, not only the needs that humans have, for drinking water, but it’s got to accommodate all of those other needs—agricultural needs, industrial needs, [and the flora and fauna of Earth.] So, I think we have to treat water in a much more respectful way. I think we have to treat rivers in a much more respectful way, than we have in the past.” Mark Angelo, International River Conservationist

Co-directors David McIlvride and Roger Williams have given us RiverBlue about the contamination and literal deaths of rivers around the world. We have had a cornucopia of documentary films and television shows about our oceans, now this well-produced documentary shifts that focus to the primary source of our drinking water, rivers.

Mark Angelo is the film’s unofficial host as he goes around the world, speaking about the massive tragedy—along with a few other interviewees speaking passionately on the tragedy of dying rivers, and of initiatives to bring them back to life.

Williams and McIlvride focus on the textile and tannery industries as one of the most, if not the most culpable sources of pollution. Within that industry they focus on blue jeans the manufacture of which is a huge contributor to river destruction. The directors also interview designers and boutique garment manufacturers who are recreating the design and manufacturing process in a much less destructive manner.

Narrated by Jason Priestly, RiverBlue is a prime example of a film feeding back to us consumers the destruction of the environment, and the loss of life wrought by our careless purchases. Following the film, I heartily suggest you go to the film’s ‘Take Action’ section to act on the daunting information the film provides. Yours truly will seek out his next jeans purchase from one of those reformed manufacturers. And, I have placed the annual World Rivers Day on my calendar.