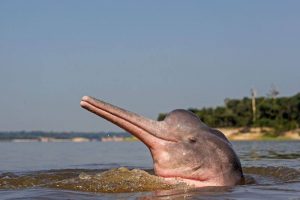 If I were teaching a graduate course in ethics I would have my class see A River Below. The students would then be required to write a comprehensive examination of the ethics of the five principals: The director, the two ‘stars,’ an impoverished Amazonian river community immersed in a Brazilian environmental controversy, and the Amazon river dolphin.

In addition to habitat loss and inadvertent deaths from fishing, the Amazon river dolphin was being hunted and slaughtered by fishermen solely to be used as bait to attract a particular species of commercially viable fish.

Enter our two stars: Richard Rasmussen and Fernando Trujillo. They are passionate about nature in general, and, specifically about saving the river dolphin. Rasmussen is a television star who uses his media platform to promote the value of the natural world. He is as passionate about his own legend as he is about the world’s fauna. Trujillo is a biologist.

Frustrated at a lack of awareness of the ongoing slaughter, Rasmussen reasons the only way to generate public awareness of the slaughter is to have a visceral image of its demise on national television. His idea is realized. Governmental protections are put in place. Then all hell breaks loose—well, since the destruction of the Amazon’s watershed is already hell, let’s just say even more hell breaks loose. The utterly sincere Trujillo ends up having a body guard, and to wear a bullet-proof vest.

The producers of A River Below are well aware their film is not your father’s environmental documentary film. The making of the film becomes its own meta-story. If my hypothetical students did a good job on their ethical analyses, they would be exploring both the micro and macro ethics of the actions of our five principals. Only the dolphins would emerge free of any ethical concerns.