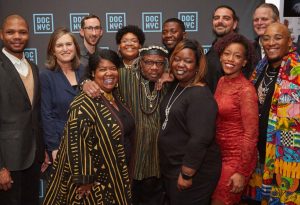 “I say we live in a throwaway society. We throw everything away. Society sees our children as not good, at that moment, because we gotta put so much stuff into them, so we just throw ’em away. As we started this process, everything was scrap. And so what we do is we let children make something productive. So, they take the drums, and they design ’em, and they get ’em nice and beautiful. And then they’re able to take their creative spirits, now that they found that ‘hey, I am worth somethin.'”
Edward ‘Nardie’ White, Co-Founder, River City Drum Corp

Anne Flatté’s and Marlon Johnson’s River City Drumbeat is an expertly produced documentary film of joy, sorrow, hope, and dreams fulfilled. The subject is the African-American River City Drum Corp in Louisville, Kentucky. The Corp was co-founded 30 years ago by Zambia Nkrumah and her husband familiarly referred to as ‘Nardie’.

The film covers a dramatic transition in the organization’s leadership. Nardie is retiring from his position as Director, and Albert Shumake is assuming the role as Director. Nardie is the film’s de facto host as he speaks throughout about his organization, his personal story, and as we see him interacting with students and peers. We also learn of the untimely passing of Zambia Nkrumah who is deeply revered by the community surrounding the Drum Corp.

The film is chock full of drum and other kinds of music, yet it is the stories about the Drum Corp’s leadership and the young people participants who are transcending the sequela of poverty and disenfranchisement through music, teamwork, and the caring of adults that is truly inspiring to those of us lucky enough to see and learn from River City Drumbeat.

Stay in touch with the film’s website to learn how you find and be moved by this film.