“We’ve taken the right to farm to the point where it’s easily called the right to harm.” Gary Nester, Iowa County Resident 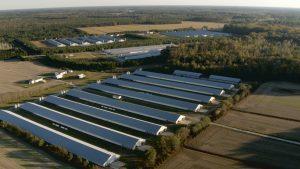 Right To Harm is Annie Speicher’s and Matt Wechsler’s coverage of the damaging health and environmental impacts of factory farms—and citizens’ initiatives to protect themselves, protect their environment, and to, ultimately, make our food-growing systems sustainable.

The film’s focus is on farm animals—hogs and chickens—kept in buildings called Concentrated Animal Feeding Operations (CAFOs). Between 90 and 95 percent of animals raised for our consumption come from these buildings. Speicher and Wechsler provide many aerial photographs of these CAFOs throughout the film. The white buildings look neat, clean, and modern. The filmmakers wisely avoid the inner environs—that horror story has already been well told and shown.

The film features interviews with families who have been harmed by their proximity to factory farms, authorities speaking about the causes of this harm, and citizen activists confronting industry-friendly politicians. There seems to be a consensus that it will take people-based actions to make a significant difference. The filmmakers point out there are approximately 200 community organizations spread across the United States devoted to farm reform.

Right To Harm is an expertly produced documentary which articulately and elegantly makes its points. The film’s website is also well-produced and includes a ‘Take Action’ link.