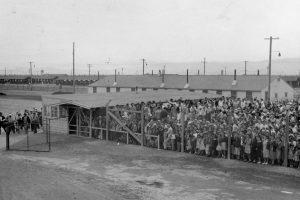 Any other time, I may have passed on viewing this documentary film about the World War II internment of 127,000 Japanese Americans in concentration camps. Two-thirds of this population were American citizens.

Instead, I have watched the film for one simple reason—history is repeating itself. Immigrants have been and are being interned, and the United States government continues the mass incarceration of mostly people of color.

After Pearl Harbor, the United States government created the ‘War Relocation Authority’ to place Japanese Americans in concentration camps called ‘relocation centers.’ Ten camps were built throughout the American west. One, the ‘Tule Lake Segregation Center’ in northern California, was built to imprison those Japanese Americans who did not respond in a desirable way to a required ‘loyalty oath’—they specifically objected to questions 27 and 28. At its peak, the camp had a population of 18,789 Japanese Americans.

27: Are you willing to serve in the armed services of the United States, wherever occurred?

The oath was one of countless insults to Japanese Americans—on top of their global displacement. The above two questions were the most grievous.

Konrad Aderer’s Resistance at Tule Lake tells the story of the rebellion, the initiatives of the prisoners, and the punitive counter measures of our government. The film also follows a contemporary group of journeyers on a ‘pilgrimage’ to the preserved Tule Lake camp to acknowledge the US malfeasance, and honor its victims.

If I was king of the world I would add the expertly-produced Resistance at Tule Lake to both high school and college curricula—and make it required viewing for members of all three branches of our federal government, and every state governor.