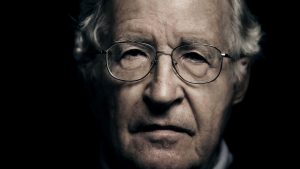 Fimmakers Peter D. Hutchison, Kelly Nyks and Jared P. Scott have taken interviews of legendary author/speaker/activist Noam Chomsky and woven them into a coherent narrative of the corruption of our American socio-economic-political systems. In addition to being a requiem, the film is also a post mortem—descriptions of the strategies and tactics that have transformed the United States of America into an oligarchy.

The Ten Principles are:

Keep the Rabble in Line

In less than 73 minutes Chomsky articulates these strategies and tactics used by the wealthy and powerful to achieve their goals. The goals have been met. We are a large population of humans supporting the wealth and power of 1% of the country’s population—and suffering the consequences.

This is yet another must-see documentary about socio-political-economic injustice in the United States of America. When confronted with our national shame I often think of two stanzas from The Rolling Stones song, ‘Sympathy for the Devil’:

I shouted out,
‘Who killed the Kennedys?’
When after all
It was you and me

Yes, documentaries of this ilk can be demoralizing, disheartening. Yet, they are also part of the solution, and as implied by Mick Jagger’s accusation, we are the ones who can revive our democracy.

Requiem for the American Dream is available from Netflix, Vimeo, and iTunes.