Written, produced, and directed by Jeff L. Lieberman, Re-emerging: The Jews of Nigeria introduces a small, growing community of Nigerians of Igbo descent who discovered they have a heritage of Judaism and have identified themselves as Jewish. 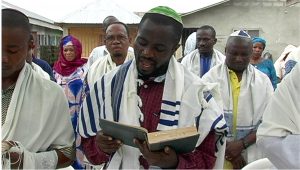 ‘Igbo’ (pronounced eeBo) is an African ethnicity. Lieberman provides a brief outline of Igbo history and focuses on the emergence of Judaism in their Nigerian community. The inciting incident: No surprise, the Internet.

Young people accessing this global connection discovered and became intrigued with their perceived Jewish heritage. With minimal resources they have educated themselves, striving to learn as much as possible about the religion, its practices, rules and rituals, prayers and chants, the Hebrew language, and the Torah.

Naturally, Lieberman interviews many people covering the historical and sociological aspects of this emergence. There is one interviewee, Shmuel, who we see frequently throughout the film. In addition to his dramatic—if not epic—story, there is his charm. Every time Shmuel appears and speaks, his charm and sweetness melt our hearts. His story is far from over. He deeply aspires to being a Rabbi, but the global Jewish community has yet to provide an opportunity to this young man to fulfill his deeply held religious passion. We root for him in his still-unfulfilled quest. This nascent community of Jewish people want more support and a greater connection with the world’s Jewish community. Despite this absence of support, despite the intolerance they face within their homeland, these Igbo people are living their lives as Jews with full commitment.

In just 93 minutes Lieberman tells many stories and introduces issues and conflicts which deserve global attention.

Re-emerging: The Jews of Nigeria has played in theaters in New York and Los Angeles as well as throughout Israel. You may find the film simply by going to its website. I encourage you to do so. Seeing Lieberman’s work is quite thought-provoking.