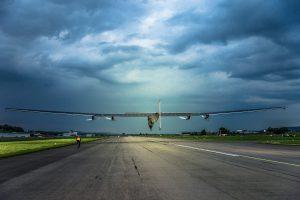 Point of No Return tells and shows the story of Solar Impulse, the first solar powered airplane to fly around the world. The environmental demonstration project was created by Bertrand Piccard and André Borschberg who took turns piloting the plane through the legs of its 505 day journey at an average speed of 45 MPH. The plane could only hold one pilot at a time.

As a first-of project Solar Impulse was vulnerable to the caprice of weather and wind, sun and shade, to limitations of the plane’s technology, and the challenges each of the pilots faced in staying awake and alert.

Following the project from before the flight’s beginning through after its end, filmmakers Quinn Kanaly and Noel Dockstader take viewers on a harrowing journey that could have easily ended in tragedy—especially considering that the two pilots dared fate by not listening to some of the 120 support staff who recommended ending the flight at certain points before its completion.

Point of No Return tells its story of a bold and dangerous journey with gorgeous cinematography. Like Ron Howard’s ‘Apollo 13,’ despite our foreknowledge of the film’s triumphant conclusion, Kanaly and Dockstader keep us viewers on the edge of our seats. 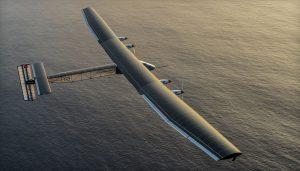