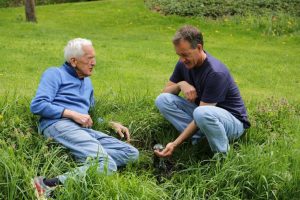 Campbell is also a charismatic activist addressing the life-destroying diets of the American people—as well as the corrupt political systems that have cultivated our nation’s unhealthy eating habits. This film is an integral part of Campbell’s over-arching strategy to effect improvements in the public health and environment of the American people.

Campbell tells the story of his father’s and his own discovery of the health values of a ‘whole foods, plant-based’ diet—‘whole foods,’ in this context refers to non-processed foods. His film is a reasoned and powerful testament on behalf of healthy eating and living.

Whether or not you’ve seen a cornucopia of documentaries about food, health, and agribusiness, Campbell’s narratives of his father’s and his own activism are touching and deeply inspiring. If I had the resources I’d send a copy of this film to every member of our House of Representatives and Senate, every member of our President’s Cabinet, and every state Governor.

From the film’s website: “Our mission is to lead a new grassroots movement sharing the life-changing message that plant-based nutrition can not only prevent a broad range of diseases and illnesses, but also reverse some of the most dangerous chronic conditions.”

I viewed PlantPure Nation on Netflix. More information about how to view the film can be found on its website.