Planetary is a cinematic poem, a visual essay about the relationship between us humans and our planet—especially our ecosphere.

The film was launched in theaters on Earth Day. You can access it now at the film’s website — http://weareplanetary.com/ 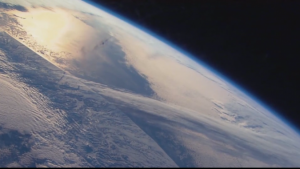 Filmmakers Guy Reid, Steve Watts Kennedy, and Christof Ferstad have created as moving, as compelling an environmental film as I’ve seen. They have woven together ecstatic visions of our world together with 18 writers and leaders each of whom shares pearls of wisdom about our humanity and our Earth.

I’ve been seeing my fair share of masterpiece documentary films lately, and this is one of them.

As I’ve done with my review of The Hidden Hand, I’m including a personal statement as a coda.

I was born in Chicago, in 1948. My memory begins around the age of three, 1951, in Charleston, South Carolina – Steven Colbert’s home state.

I remember noticing cars, and the stinky, smoky fumes blowing out the tail pipes of these early 50s automobiles.

In addition to that stink, my toddler’s mind also made a connection between the feces that emerge from the backs of dogs with the fumes that spew out of the backs of cars. I remember thinking/feeling (translating from my then-toddler’s vague notion) ‘That can’t be good.’

But, before I go on, let’s take a little detour…. into movies – the very first one
I remember seeing, to be specific. I was 6 years old.

A small boat in the ocean, with a captain, one harpoon gun, and a small crew. It’s a whaling boat. The boat comes upon a whale, but this whale is different – he stands up on his tail, supported by the ocean, and sings opera. He sings with joy and a big smile on his whale face. The crew grab chairs, sit down, and thoroughly enjoy the performance. The captain, however, is single-minded. There is no measure of magic or beauty that can distract him from his commercial purpose – the killing of whales. A storm comes up, the captain goes for the harpoon, the crew fights him; the whale is swimming as fast as he can to escape his slaughter. The captain has his way. My child’s heart is broken. The last scene offers cold comfort. The formerly grey whale is now pink, and instead of standing on his tail, on the ocean, he’s standing on a cloud, again singing opera.

What could be a simpler, clearer message? Etched forever in my brain – and heart.

Back to the tail pipes. Over a period of years my awareness of our world grew, and I realized I live on a giant globe full of massive cities full of massive numbers of vehicles each with a tail pipe. That feeling of ‘That-can’t-be-good’ continued to grow. Airplanes, trucks, trains, power plants, busses, factories, lawn mowers, motor cycles, tractors, model planes, chain saws, go-carts – there was simply no limit to the number of tail pipes on our planet.

I developed a phobia after seeing some animated footage of rockets and our Earth on our black-and-white TV set (which featured only two channels). I was afraid that if we really shot rockets into outer space the first one would puncture the shell that protects our atmosphere. We’d then lose all our air like a balloon bursting. ‘That-can’t-be-good.’

About 50 years later I learned that each flight of NASA’s space shuttle has a devastating effect on our rapidly diminishing ozone layer. Who knows about all the other space vehicles and the massive number of airplane flights every day.

It was sometime in the late 1950s or early 1960s that I began to hear something about ‘the greenhouse effect.’ (I first learned the word, ‘environment’, around 1960, through a publication for school kids called The Weekly Reader.)  This ‘effect’ has something to do with over-heating the Earth’s environment. A few years later I learned the word, ‘ecosphere’ which reinforced the idea of the Earth as a giant terrarium – which also contains a giant aquarium. I then realized more clearly what ‘That-can’t-be-good’ was about. We’re poisoning our terrarium.

After years of childhood and adolescent trauma I was jolted back to reality by something called ‘the Arab oil embargo’ in the early 1970s. No longer was gas 19 cents a gallon – or sometimes ten cents a gallon during ‘gas wars.’ No longer would I stay in the car while an attendant pumped gas, cleaned windows, and checked the oil. Now the prices were climbing, there were lines at filling stations, and everyone was kvetching. I didn’t do or learn anything about this crisis – as I had become a devout narcissist.

But I did take notice. I noticed that beginning sometime in the mid-1970s – after many years of hearing ‘See the USA in your Chevrolet’ sung in television commercials – there were endless commercials about pickup trucks. For many years I casually wondered why.

I then learned that when the United States faces big problems there is a nation-wide gnashing of teeth and beating of breast. Congress writes effective legislation to address the problem; and this legislation is then watered down primarily by short-term profit and growth interests – the same interests embodied by the above-mentioned Captain ‘Ahab.’ So, cars were mandated to be a little bit cleaner and more fuel efficient, but not trucks. Trucks, therefore, are cheaper to make, let’s cram them down the nation’s collective throat.

Also in the early 70s I read The Teachings of Don Juan by Carlos Castaneda – a memoir of the author’s experience as a student of an anonymous shaman in Mexico. I subsequently learned that a portion of the material had been composed rather than experienced. In any case, although the experiences described were incredible, I was truly moved by only one statement – attributed to the shaman: You must love the Earth. Whoever proclaimed this simply-worded moral imperative made a chink in my armor of narcissism, and reminded me of a concern seeded in me as a young child by tail pipes.

Although I didn’t act on my growing altruistic concerns, I kept noticing things – especially these large vehicles that popped up in the mid-1980s. They weren’t trucks, they weren’t station wagons, and it took a few years before I heard and understood the letters, SUV. More trucks, more vehicles exempted from the stricter emissions standards and fuel efficiency of ‘cars’ – and these were much larger than those pick-up trucks of the mid-seventies.

This time I felt even more pain because it was my generation that marketed and purchased these world-destroyers. My generation, the generation of spirit, justice, ecology, nature, creativity, liberation, beauty, peace, and love. My generation.

Of course, the rise of the SUV is simply a symbol of America’s non-stop acts of commission in its destruction of our ecosphere.

It was some time in the early 1990s. I don’t know how. Was it a magazine that came my way, or something off the nascent web? I do know it was an article by Amory Lovins in the Atlantic Monthly. Simply put, we’ve had the technology for many years to have much cleaner and more fuel-efficient engines for all our vehicles. He put into words something I had felt, and, of course, this infuriated me more – the destructiveness, stubbornness, and short-sightedness of the powers-that-be. (Lovins founded the Rocky Mountain Institute in Snowmass, Colorado, in 1982.)

And all these decades there were – and still are – the warning scientists of, and the well-paid deniers of global warming. And all these decades there were the non-stop reports of environmental change due to both the conduct of human beings and our geometrically expanding human population. And still, we made – and still make – miniscule changes in our technology and habits.

We do have many well-intentioned environmental organizations, but they rarely, if ever, form powerful coalitions. Instead, each organization tries to take care of its own goldfish bowl of focused interest.

I must confess to a simple, naive thought I’ve had for decades. It confuses me that people don’t have the common sense to realize that if you place a massive amount of a substance into a system – carbon gas into our atmosphere in this case – there will be a change, and that change, whatever the impact may be, can be observed and measured.

I hope someday a bright, young investigative journalist with a penchant for history will write and/or film a chronicle of four different topics: warnings about global warming; ignoring of warnings; technological developments that would radically reduce warming; and the ignoring of those developments.

My conclusions are simple: We won’t see effective change in the way we conduct our individual and collective lives until we change – and, especially, until we take to the streets in very large numbers. But we seem so narcissistic that I suspect only a divine intervention in our collective psyche will get us off our ever-expanding butts to make a difference.

My conversion from narcissism to altruism has been slow. I’ve yet to get to the streets. But I have made my humble contribution – I haven’t reproduced, and I’ve driven small four-cylinder cars my whole life.

I hope greater numbers of people will find the courage to change, to create a cleaner, healthier world for all life above, on, and in the Earth and sea.