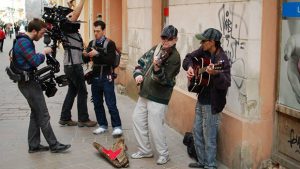 The heart of the film is, of course, survivors speaking on camera. You’ve heard the phrase, ‘the map is not the territory.’ There is simply no way to convey in words the experience of seeing and hearing these deeply wounded, noble people speaking of their experiences.

Yeger wisely places the porrajmos in context by referring to other 20th century genocides – and by including the sad information that Roma people are still being killed in Europe.

Yeger’s film is part of an international effort to acknowledge past and current persecution, oppression, and discrimination of Roma people, and to provide justice to the Roma.

As I’ve previously shared, I wrestle with the question: How do I get people to see documentary films about painful topics? Perhaps the answer lies simply in the asking of the question. Or the question is irrelevant, stupid, a fool’s errand to even ask, let alone answer.

So, I resort to simplicity. A People Uncounted is an important film which should be seen by as many people as possible. It is one of countless cries from some human beings to all human beings: Stop hurting and destroying, start being compassionate.