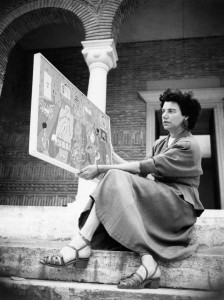 Prologue: I was working the seven-to-three front desk shift at a Grade ‘C’ motel in Atlanta, Georgia, in 1971. It was my first real job, and brought me into contact with a broad spectrum of human beings. One of them was an elderly woman who made frequent requests for help. She was always dressed in fashionable and/or colorful outfits, she wore much jewelry, her grey hair was always styled, and she wore heavy makeup.

Her name was Hazel Guggenheim McKinley. That name had no meaning to me. She spent many weeks at this motel. Finally, I broached the topic of what is she doing in Atlanta. She was teaching art at a local college. We spoke a bit, a very small bit about art. I had recently purchased a high-quality print of The Garden of Earthly Delights by Hieronymus Bosch, and I had mentioned it to her. On the day she departed, Miss McKinley gave me one of her pieces with a note saying it was the closest thing to Bosch’s style she had painted.

So, you see, I had to view and review this documentary.

Masterfully written and directed by Lisa Immordino Vreeland, Peggy Guggenheim: Art Addict follows art icon Guggenheim from early childhood through her retirement in her adopted home town of Venice, Italy, where one of her four collections is on display.

Vreeland has created a documentary rich in character, story, and imagery. The film follows Guggenheim’s personal relationships, the evolution of her collection, the crucial role she played in rescuing, collecting, and curating era-defining modern art, and her support of now iconic artists who may very well have been unrealized and unknown without her interventions in their lives.

Vreeland’s film gives the impression that Peggy Guggenheim’s name and contributions belongs high up in the history of art. Hopefully, that is the case.

Screeners for review rarely do justice to a film. After the theatrical release, I look forward to seeing the Blu-ray or 4K disc—especially the inevitable extras.