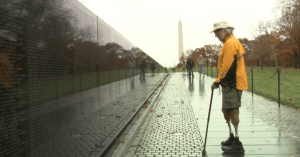 “The United States has been at war under every President since 1941. However, since the end of World War II, US Presidents have authorized illegal and unconstitutional wars of aggression. According to the US Constitution, only Congress can declare war. But, Presidents have consistently found ways to wage war without Congressional approval. Between 1950 and 2000, the US government has overthrown 60 democratically elected governments, dropped bombs on over 30 nations, and attempted assassinations of over 60 foreign leaders. Millions died in these undeclared wars.” from Paying the Price for Peace

S. Brian Willson was a pure bred, highly skilled Republican Conservative until his first week in Viet Nam when he observed the horrors of the war, of our attacks on villages peopled by women, children, and the elderly—killed by 500 pound bombs, with a napalm chaser.

Military authorities did not court-martial Willson, they did not want to give him a public platform to reveal the insanity of violence perpetrated by the United States. That tactic did not work. He took that platform.

Willson’s name came to the foreground when he lost his legs while protesting. It was 1987, another US intervention in another Third World country, Nicaragua. The United States, as always, was supporting the bad guys, the Contras. Surrounded by protesters, the train carrying a shipment of weapons for the Contras was rolling down the tracks. The engineer was ordered to not stop. Willson refused to get off the tracks.

Supported by his heightened profile, he became a powerful domestic and international activist.

Directed by Bo Boudart, and narrated by the ubiquitous Peter Coyote, Paying the Price for Peace tells Willson’s story, and covers decades of antiwar activism. The film includes interviews of several activists including Ron Kovic, author of “Born on the Fourth of July” which was subsequently made into a narrative film directed by Oliver Stone, and stared by Tom Cruise. Willson was also born on the fourth of July.

“There are over 1,000,000 American military personnel stationed in 175 countries. The US government has increased its military budget by nearly 90% since 2001. That budget is now 700 billion dollars per year. Add in health costs and interest for 1.5 million veterans, the US is now paying one trillion dollars per year for war and the preparations for war. Our government spends ten times more per citizen on average for military costs than most industrial nations. This increased military spending has not made the US safer at home or abroad.” from Paying the Price for Peace.

Paying the Price for Peace is a compelling clarion call for more, much more political activism on behalf of peace and non-violence.

Paying the Price for Peace is distributed by Cinema Libre.

Note: When I watched The Most Dangerous Man in America, a documentary about legendary activist Daniel Ellsberg—who also appears in Paying the Price for Peace—I hoped Hollywood would eventually produce a respectful, standard-bearing film of his story. Instead, Steven Spielberg made “The Post” about the publication of Ellsberg’s ‘Pentagon Papers’ by the Washington Post. Ellsberg’s story is far more dramatic and engaging than newsies struggling with issues of free press. Hope Springs Eternal—perhaps Ellsberg’s story will be produced.