Paper Clips documents the conception and emergence of a Holocaust memorial in Christian-White-Rural-Conservative Tennessee. 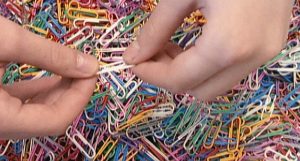 The story begins at Whitwell Middle School, in Whitwell, Tennessee – 24 miles northwest of Chattanooga. The film’s central character is Principal Linda Hooper who provides a good portion of the narration. Her on-screen presence is as powerful as any A-list celebrity.

Hooper opens the story by describing the town and its people. Noticing the demographic homogeneity of their small population, Hooper, two faculty members (Assistant Principal David Smith and 8th Grade teacher Sandra Roberts), and the students began, in 1998, an exploration of diversity and tolerance. Smith initially went to a conference, and upon his return suggested studying the Holocaust.

Student Casey Condra, one of a few key figures in the film, relates, “The idea for the paperclips came when a student said, ‘What is six million? I’ve never seen six million.’ Miss Hooper said, ‘Well, neither have I. If you can find something to collect, we’ll try it.’”

The students consulted the Internet and discovered that the paperclip was invented in Norway, and that Norwegians used the paperclip as a symbol during the Holocaust. They wore paperclips on their collars to represent and acknowledge the victims. Any more overt expression of sympathy could lead to jail or execution. The paperclip was their positive analog to the negative requirement of Jews to wear Stars of David.

And so the students and faculty of Whitwell Middle School began to collect paperclips to honor and memorialize Holocaust victims. The project grew, the townspeople became involved, and Whitwell, Tennessee, became the home to the small yet internationally renowned Children’s Holocaust Memorial.

I was raised in the South, experienced my share of anti-Semitism. The idea, the reality that these kids, this community could discover and respond so profoundly to this unspeakably horrific event – light-years from their time and culture – overwhelmed me. Dramatic films and documentaries often times have moments which evoke tears. This is the first film of any kind that had me in tears most of its 84 minutes. You may not respond as I did, but be forewarned!

The film’s website is no longer available, but you can find it from several streaming sites.