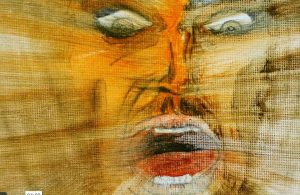 “Frequently, when they come to the office they say, I want my migraine cured. I would look at them and say, If I can cure your migraine, I’m going to get the Nobel Prize. That’s how big that is.”
Dr. Allan Purdy, Prof. of Neurology, Dalhousie University

Written, directed, and narrated by Susanna Styron, Out of My Head is a powerful, provocative cinematic essay about migraine. You may note I did not write ‘migraine headaches.’ I learned from the film that there are multiple components to migraines—including abdominal issues—and that this painful, disturbing condition should be seen as a whole body condition rather than limited to the brain.

Styron became deeply involved with migraines when her daughter Emma developed the condition. The mother used her filmmaking talents to shine much more light on the condition, and, especially the life-changing, debilitating impact it has on the one billion sufferers around the world. Styron also includes stories of celebrated artists who have lived with migraine including Hildegard of Bingen, Lewis Carroll, and Joan Didion.

The film features interviews with sufferers, physicians, and researchers—as well as still and moving images capturing the agony these one billion people endure. Finding a silver lining, Styron also covers the mysterious relationship between art, artists, spirituality and migraine. That relationship could be another feature documentary.

Out of My Head makes it abundantly clear that migraine has not been given the attention needed to find effective treatments for its sufferers. I refer you to the film’s Take Action page which gives us the opportunity to make a small contribution which could make a big difference.

A Kino Lorber release, Out of My Head is an expertly produced film which brings vital attention to the subject of migraine, and, especially to the people who suffer its impacts. It is currently available for educational and non-profit institutions, and will be available for commercial sales June, 2020.

What a beautiful, loving gift Susanna Styron has given her daughter—and to all who suffer.