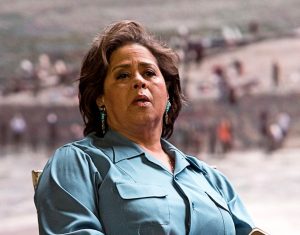 Anna Deavere Smith interviewed more than 250 people to write and perform her epic one-woman play, Notes from the Field.

Smith culled through this 300 hours of interviews, choose 19 interviewees, selected interview segments of each, and performed them as the interviewee. She began work on this project in 2012, performed it as a one-woman show, and had it filmed for HBO. It premiered on February 24, 2018.

The central topic is the school-to-prison pipeline which has become an integral part of American society. There is also a broader focus on racism. The film juxtaposes Smith’s performances with archival footage of police abuse, riots, and protests.

Notes from the Field is stunning from beginning to end. Smith’s acting is the strongest single performance I have experienced to date.