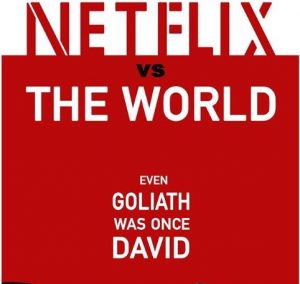 “When you’re starting a new company, you labor in obscurity for what feels like years. You tell your friends what you’re working on, and they kind of glaze over. They don’t understand, no one recognizes the name. And you wonder, ‘who am I doing this for?’”
Marc Randolph, Netflix Co-founder and Former CEO

Netflix vs. The World tells the story of the birth and emergence of… well, you know.

Director Shawn Cauthen interviews or features a handful of Netflix’s creators including the above referenced Mr. Randolph who appears peppered throughout the film. Together with Reed Hastings, the two are the egg that gestated the company to its current dominance. Randolph’s frequent appearances seems to make him the host to this story.

But wait. There’s more. The central story of this drama is a ‘Ford v Ferrari’ duel between Blockbuster and Netflix. Along with a few other Blockbuster executives, Cauthen interviews former Blockbuster Chairman and CEO John Antioco. Blockbuster was positioned to either destroy Netflix, or, more likely, subsume it. That could have happened had Blockbuster taken the nascent Netflix’s offer to purchase Netflix for $50 million, or had Blockbuster had not been ‘raided’ by the vampire corporate raider known as Carl Icahn.

If you want to know how you find yourself, like yours truly, watching countless hours of fiction and nonfiction entertainment via Netflix, Netflix vs. The World is the movie for you. Perhaps some narrative filmmakers will cover that Blockbuster v Netflix battle. If so, I’ll be fascinated to see which current or future streaming service gets that one.