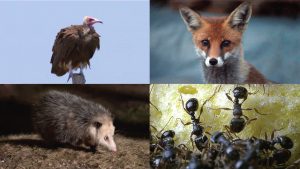 Directed by Robin Bicknell, and narrated by David Suzuki, Nature’s Cleanup Crew covers the scavenger species who do our world much-needed good. We are introduced to the very fine services of: Ants, Opossums, Foxes, Bacteria, and Vultures

Ants: Urban Ecologists Amy Savage and Clint Penick tell of the virtues of ants 23 species of which are found on and below Broadway, the one in Manhattan. They consume the equivalent of a quarter million in doughnuts annually. If you piled them up, they would reach twice the height of the Empire State building.

Opossums: Psychologist and Biologist Suzanne MacDonald was studying raccoon behavior which was convenient since they lived in her backyard. One night an opossum showed up, and to make a long story short, MacDonald fell in love with opossums. They are the only marsupial species in the United States and Canada. MacDonald comments that almost all the common beliefs about opossums are false, and she lists the many virtues of these very maligned creatures. The most well-known virtue is their massive consumption of ticks so many of which cause Lyme disease.

Foxes: We go to Berlin where we meet Evolutionary Ecologist Sophia Kimmig from the Leibniz Institute for Zoo and Wildlife Research. She studies wolves in metropolitan areas, and notes that global warming—my word for ‘climate change’—has brought populations of foxes farther north. One benefit Kimmig notes is their role in controlling populations of rodents and rabbits.

Bacteria: Environmental Engineer Satinder Kaur Brar of York University Institut national de la recherché scientific is working with a bacterium called Alcanivorax which can break down hydro-carbons into Co2 and water. She has completed tests of this process, and her next step is a large scale attempt to break down hydro-carbons—a potential global game changer.

Vultures: Evan Buechley Conservation Biologist of HawkWatchInternational/Smithsonian is supporting vultures who are decreasing in numbers around the world. This decline in vulture populations is increasing the incidents of human diseases (long story). Vultures are experiencing loss from hunting, poisoning, and habitat loss.

All of the people supporting ‘nature’s cleanup’ are heroes in my book. Like other environmental documentaries I’ve seen, this film should be seen far and wide.

Nature’s Cleanup Crew is produced by Kensington Productions, and distributed by Bullfrog Films.

Music is by Eric Cadesky and Nick Dyer