Although obviously a contradiction in terms, a ‘mudblood’ is a muggle who happens to possess some kind of metaphysical power. 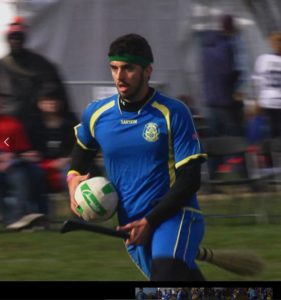 Mudbloods is a documentary about intercollegiate quidditch. The film follows UCLA’s quidditch team through the 2011 season of play leading to the Annual World Cup competition in Middlebury, Vermont.

Adjusting to terra firma requires each player—or mudblood—to run with a broom stick between her or his thigh, held there by one hand. I presume players have a choice as to which of the two hands are to be utilized. In any case, the elephant in this film’s room are the inevitable groin-related jokes.

Tom Marks, UCLA’s Quidditch team coach and captain, is our central character. His passion for the sport and for his team shines through the entire film. Also appearing throughout the film is Alex Benepe, Intercollegiate Quidditch Commissioner of the International Quidditch Association (IQA) which sanctions the competitions. It is hoped that the game will find its way to the Olympics.

The play is rough, and demands skills and endurance. Benepe describes mudblood quidditch as a cross between rugby and dodge ball. The teams have seven players on the field. Benepe presides the field of World Cup play sporting formal wear with a top hat and scepter. When asked about the broom, he doesn’t want to speak about it because ‘that opens up a can-of-worms.’

Mudblood quidditch emerged in the fall of 2005, at Middlebury College, in Vermont. The first World Cup was held in 2007, at Middlebury which has dominated the league for years. Unlike the other schools, Middlebury has several teams, and out of their intra-collegiate play, the winning team competes in the World Cup.

After the film introduces us to muggles, it then follows the challenge the UCLA team faces to raise funds to support the players in intercollegiate travel and, especially, to fly to the World Cup. Aside from the winning or losing of games, this financial challenge is the over-arching story.

My reaction to Mudbloods—from the moment of learning that there is a film about intercollegiate quidditch, through viewing the film—was one of a mildly dropped jaw. As I write this review, my jaw is still dropped—and my curiosity is peaked. I hope someone at Middlebury College will respond to my request to purchase a team t-shirt.

Phun Phact: In the late 1960s, in Atlanta, we named our close circle of friends ‘The Muggles Family.’

Flash: Someone did respond to my quest for a quidditch t-shirt!