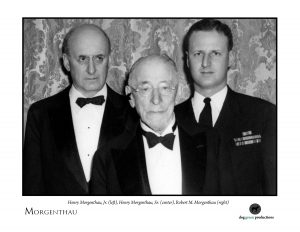 Released in 2015, 7th Art’s Morgenthau is one of a countless number of documentaries that deserve a much wider audience. The film is both a series of history lessons that encompass three centuries, and profiles of three noble human beings: Henry Morgenthau Senior, United States Ambassador to the Ottoman Empire; Henry Morgenthau Junior, United States Secretary of Treasury under Franklin Roosevelt’s administration; and Robert M. Morgenthau, District Attorney of New York County for over 30 years. Their professional lives played out on highly public local, national, and international stages.

In addition to shared DNA, all three found their way to a shared ethos which can be glibly-yet-accurately described as ‘do the right thing.’ In the case of the three gentlemen, they would expand this simplistic ethical principal by prefacing the adage with ‘When in power.’

The not-so-sub subtext of this film is: Look at who and what are in power in the United States now. That contrast is the most important reason to see Morganthau and to bathe in a little inspiration contemplating the possibilities of noble leadership.

Having released hundreds of feature documentaries through his company, Seventh Art Releasing, Jake Bart is one of many unsung heroes in the documentary film world. I’ve seen several 7th Arts titles, and intend to see many more.