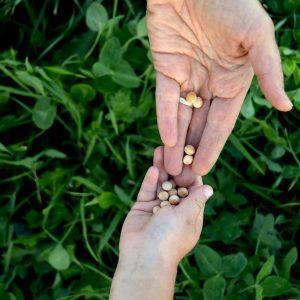 Ten years in the making, Modified is veteran filmmaker Aube Giroux’s inspiring, infuriating plea for the United States and Canada to start labeling food products containing genetically modified ingredients. The film tore up the festival circuit with at least ten wins, and was selected by at least twelve other festivals.

Giroux tells her personal story of an idyllic mother-daughter relationship and the legacy of respect for food, gardening, and farming that mother Jali instilled in her daughter—a legacy that includes this finely produced documentary.

Many years ago, when I first learned that one use of GM foods is to make crops able to be treated by pesticides without harm to the plants, I thought the world had gone mad. Life-killing chemicals on top of genetically manipulated crops, what can go wrong? What is going wrong? Although the information is censored, the heroes in this story—citizen activists, journalists, and filmmakers are breaking through the censors’ walls.

You may have read about or seen films about the potential adverse effects of GM foods. Whether or not you have, I urge readers to see this film. In addition to the quality of the film’s production, the personal story is touching, it deepens the film’s impact.

On the film’s website, make sure you scroll all the way through the TAKE ACTION page. As always, be a part of the solution.

Caution: Giroux includes scenes of her creation of various dishes with ingredients from her organic garden and farm. You will want to reach into the screen to dine on these enticing dishes. You can find these recipes HERE.