‘pelagic’ – of or relating to the open sea. 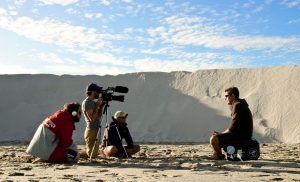 Let’s face it. The narrator’s voice doesn’t fit the tone of this film. The opening narration is unnecessary, if not pretentious. Sometimes it’s not clear who he’s talking about. Who is going where? Is this an organization? If so, what or who are they called? I wanted and needed more introductory context.

Despite these…. concerns, there’s a reason why México Pelágico has five full stars next to its Netflix title. Two reasons, that is.

The film is inspiring and beautiful.

After viewing, I consulted the film’s English language website seeking answers to my questions.

If I understand correctly, there’s this ‘team’ of young adults called Pelagic Life. It must be based in Mexico—by virtue of the title and language of the film. The team is dedicated to “documenting awesome sea-life phenomenon” (sic).

This team had an inciting incident—which we see in the film’s introduction. They were under water, in the open ocean, observing a group of sharks dinning on a shoaling of sardines. (First time I’d seen sharks doing that.) The team discovered a shark that had bit on a hook’s bait. The hook was attached to a rope which, in turn, was attached to an unmanned buoy.

The shark was slowly dying as it struggled against the buoy’s rope. This is the manner local fishermen use to capture sharks for slaughter and sale. The young people were not previously aware of this method. The team struggled with and rescued the shark from the hook.

The young people’s horror sparked a metamorphosis of their goal of exploration to one of activism.

México Pelágico is heart-warming and deeply inspiring. Many of its high quality undersea images were new and revelatory to me—and I’ve seen a cornucopia of nature programs in the last five decades. These charming young people have made dramatic differences in the oceans surrounding Mexico—and continue to do so. They have, indeed, documented awesome sea-life phenomena. They are now one of those phenomena.

According to the website there’s going to be a México Pelágico 2. If anyone from Pelagic Life is reading this review, I hope you will consider my above-mentioned concerns. (Suggestion: Employ a female narrator.)

Note: When viewing the film’s English language website, scroll down after accessing each page to find the substance of that page.