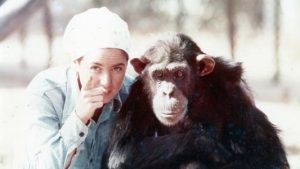 Directed by well-lauded veteran filmmaker Alex Parkinson, Lucy the Human Chimp tells the epic story of a young woman’s devotion to the care of a chimpanzee who had been raised by psychologist Maurice Temerlin and his wife Jane as an experiment. Eventually, Lucy became unruly, and the couple made the painful decision to send her to Gambia, in West Africa, where the Abuko Nature Reserve would prepare Lucy for life in the wild.

Months before that decision the Temerlin’s had hired a young woman, Janis Carter, a graduate student, to care-take Lucy. Janis was 25 years old, it was 1976, she was working at the University of Oklahoma’s primate studies group.

Even though Janis was sternly warned not to bond with Lucy, the two bonded very quickly. When Janis finally confessed her misbehavior to Maurice, he was sympathetic, and let Janis know they were going to take Lucy to Africa. The couple invited—‘insisted’ is a better word—that Janis join them.

This was the inciting incident that changed forever the path of Janis Carter’s and Lucy’s lives. Janis remained with Lucy, in Africa, mostly in solitude, for at least six years.

Lucy the Human Chimp is amongst the most sensational, touching, moving documentary films I have viewed. Janis Carter’s journey is nothing less than jaw-dropping—and gratifying—a testimony to love, devotion, caring, and the dignity of non-human animals.

Lucy the Human Chimp is an HBO Max / Channel 4 film.