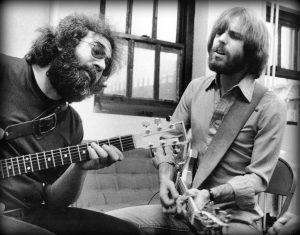 I write this review particularly for those who never heard of The Grateful Dead, never heard their music, and/or have preconceived notions and permanently installed negative attitudes toward the band.

I certainly did. I was a progressive rock snob. It took a massive amount of peer pressure and a measure of life experience to see the band, to listen to their songs, to appreciate the immeasurable contribution this phenomenon has made to our world.

Amazon’s Long Strange Trip is, on the surface, about The Grateful Dead. The film is well-funded, artfully crafted, and takes the viewer on a 3 hour and 58 minute outline of the band’s history.

Note the film’s title. It does not contain the band’s name. The film is more about Jerry Garcia, a tragically wounded folk hero, than it is about the band. (The above subtitle is yours truly’s.) To tell the story of the Dead would take many more hours. Better to read books about the band, especially “A Long Strange Trip: The Inside History of The Grateful Dead” by Dennis McNally who appears frequently throughout the film.

Although I found myself entertained and fascinated by all the music of, and information about the band, it was Garcia’s story that touched my heart. Wounded by multiple childhood tragedies, and seemingly trapped by the behemoth called ‘The Grateful Dead,’ Garcia could not escape his demons, and we could not escape the deep pain of his untimely passing. Garcia was the heart of the Dead, as he is the heart of this film.

This clarification about the film’s subject is not a disparagement of this epic documentary. Long Strange Trip has great power—it can change minds and hearts. As testimony to such I offer a quote from Owen Gleiberman’s March 17, 2017 “Variety” magazine review: “…the ultimate recommendation I can give the movie is this: I’m one of those people who can’t stand the Grateful Dead… yet I found “Long Strange Trip” enthralling. For the first time, it made me see, and feel, and understand the slovenly glory of what they were up to, even if my ears still process their music as monotonous roots-rock wallpaper.”

The band members and many other interviewees struggle to define the band’s music. Early on in the film’s first ‘Act’ McNally shares a particularly succinct view of their music and its impact:

“It’s a real challenge, if you’re not already a deadhead, to love The Grateful Dead. Because there’s so much distraction. But, if you ignore the rabid fans, and ignore the entire lack of all the expected elements of American entertainment, then you will find there’s a richness that fills your soul.

“The Grateful Dead explored freedom, and they were the cutting edge of a phenomenal re-examination of American values. For me, The Grateful Dead were the most American of all bands because each musician that started that band came from a completely different place musically, and they somehow managed to make it work.

“And you take all these streams, and you dissolve egos with acid [LSD], and you stir vigorously. That’s Grateful Dead music.”

Long Strange Trip is currently streaming via Amazon Prime. As of this writing I was unable to find if it is or will be available on disc.