Although Abraham Lincoln’s name appears in the title of this film, he is not the film’s central focus. Instead, Living with Lincoln is about the passion, power, and values of research, preservation, and curating—and a family drama that transcends generations. 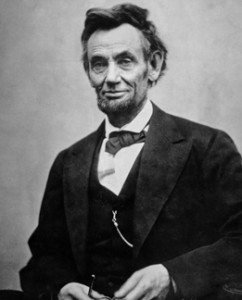 “It’s a story that starts on the bloodiest day of the Civil War,” narrates filmmaker Peter Kunhardt, “at a fence where a wounded Union soldier crawled out from among the dead. His name was William Meserve. Lincoln came to the battlefield, and thanked him and his fellow soldiers for their bravery. A generation later, that soldier’s son, Frederick Meserve, began to hunt down all of the photographs of Lincoln and the Civil War. His search turned into a lifelong obsession.”

Kunhardt’s film documents that obsession as it winds its way through his family’s modern genealogy—up to and including this documentary film. In addition to learning more about Abraham Lincoln, we meet many of Kunhardt’s ancestors and family members. The most central member in the film appears to be Kunhardt’s grandmother, Dorothy Kunhardt. Her character is so rich, her life full of so many tragedies and triumphs, she’s the one member for whom I would ‘green-light’ a big budget narrative film. But, I digress.

Peter Kunhardt is an accomplished, well-lauded documentary filmmaker. This film is the first I’ve seen from his filmography. It is that rare film that has me struggling for superlatives in describing it. The production, of course, is of top quality, and includes animation, special effects, and perfectly-suited music. Those words, though, do not capture, do not project the quantity and quality of passion and love engendered by this deceptively short, 68 minutes, film. Every superlative that comes to mind is a cliché—I rest, simply, with the word, masterpiece.