MEDECINES SANS FRONTIERES (MSF), Doctors Without Borders, is headquartered in Paris, France. The organization provides emergency medical needs to ‘populations in distress.’ It provides treatment to ten million people annually – out of a global population of more than 2 billion who have no access to 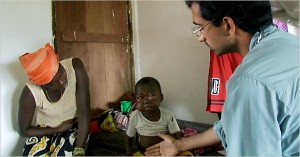 essential medical services. There are MSF missions in 70 countries, with over 20,000 locally hired staff working alongside the volunteers.

Few volunteers are accepted into the organization, and of those who go on just one ‘mission,’ few remain after that. It takes a skilled practitioner with a particular constitution to be able to work in these impoverished – an understatement – circumstances. Living in Emergency follows several of these doctors as they work, play and reflect. This film, simply put, is a story of horrors and heroes.

If you view a DVD copy of this film, I consider it critical to have the subtitles turned on – assuming, of course, that the producers have subtitles included in the film’s DVD. (‘Screeners,’ the pre-release DVDs writers view usually do not have subtitles, whilst the commercially-released DVDs often do have them.) The Living in Emergency filmmakers admirably included ambient sounds of the scenes they shot, they added music, and most of the doctors speak in the dialect of their native tongues.

What the doctors – and MSF administrators – have to say is vitally important, it deserves to be easily heard, and if inaudible, easily read. That was not the case with the disc I was sent. To be accurate, there are a few subtitles (mostly for those speaking non-English languages), but they are very small, in white, sometimes set against a white background, and many times appear all too briefly. I’m not sure how easily they’ll be read on a theater screen. I know how hard to read they are on a television or computer. If I was the executive producer of this film, I would have insisted on easily-read subtitles for all of the voice tracks.

I regret that I’m obliged to report this business about inaudible voice tracks and troubles with subtitles or lack thereof — but I’m also obliged to say that this is not a deal-killer. What Living in Emergency covers is crucial, and this film is probably the best we’re going to get on the work of Doctors Without Borders.

The organization’s work is vital (to make another understatement); the doctors are inspiring, and their circumstances heart-breaking. The not-so-sub subtext: We’ve created an over-populated, war-torn, malnourished, famine-ridden, polluted world. That fact that Doctors Without Borders exists is both a testimony to the noble aspects of our humanity as well as a symptom of a world-gone-wrong.