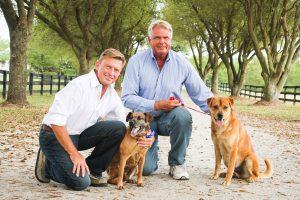 “We don’t care if they adopt from us, we just want them to adopt. It’s just saving lives.” Ron Danta

Four million animals a year are euthanized annually in the United States—primarily because of human carelessness and the greed of puppy mill operators.

Companion and partners Ron Danta and Danny Robertshaw are doing anything and everything they possibly can to reduce that number. Their work was initially inspired when they rescued 600 dogs abandoned in the aftermath of Hurricane Katrina.

The two men converted their home into a rescue and adoption organization. Their volunteer work is supported, in part, by their day jobs as equestrian trainers. So far they have carefully adopted out more than 11,000 dogs who otherwise would have been part of the above-mentioned four million. And the dogs they have not been able to adopt out, well…, the fortunate canines live out their lives well taken care of at Danny and Ron’s Rescue.

Director Ron Davis tells their story in Life in the Doghouse—a perfectly produced documentary about the two deeply compassionate men, their work, and their many, many dogs.

Life in the Dog House is a Docutainment Films production, and is available from Microsoft Store, Amazon, Netflix, and iTunes Store—although headlines indicate there will no longer be iTunes, I am sure Apple will find a way to sell the film.