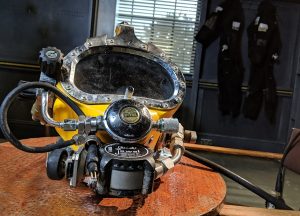 In their documentary film, Last Breath, directors Richard da Costa and Alex Parkinson take viewers on a suspenseful journey to the bottom of the Atlantic Ocean’s North Sea.

Dave Yuasa, Chris Lemons, and Duncan Allcock are working for a crude oil extraction company. We don’t know specifically what tasks they are performing, we only know that these hard-working, technologically trained men are placing themselves in jeopardy.

The film starts at the top—the raging ocean. As their container is lowered, the three bodies are accommodating to the increasing pressures of the ocean’s depths. At the bottom they are breathing a mixture of oxygen and helium creating humorously sounding voices which are simply a part of the job.

Their equipment is heavy-duty and high tech, with plenty of failsafe mechanisms, but not enough. Lemons, who is engaged with his beloved Morag Martin, is the first to work on this round of tasks.

Workers on the job at the bottom of the ocean use thick multi-functional ‘life lines.’ One of the carriers breaks away, as it drifts, Lemon’s life line tightens and quickly breaks. To make matters worse, there are equipment failures elsewhere. Lemons is adrift in 4 degree centigrade water.

The film follows the three workers as they struggle to save their compadre.

Distributed by Dogwoof, and available on Netflix, Last Breath is a captivating, well-crafted film that keeps viewers fully engaged from beginning to end.

The film’s perfectly haunting soundtrack is by Paul Leonard-Morgan. (I am making a point of acknowledging composers and performers of documentary sound tracks.)