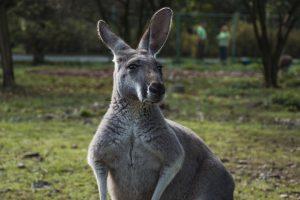 “Australia has the worst mammal extinction rate in the world. One out of three mammal extinctions in the last 400 years has occurred in Australia. Government raw survey data shows that wide landscapes are now significantly depleted of kangaroos. It is time to carefully assess what is happening to kangaroo, wallaby, and wallaroo species.” Senator Lee Rhiannon, The Greens Parliament of Australia

Kangaroo: A Love-Hate Story is a hard-hitting, carefully researched, and expertly produced exposé of the 200 years and counting slaughter of Australia’s globally recognized icon, kangaroos.

The film tells the familiar story of the destruction of our natural world by commercial interests—with an added measure of hypocrisy. The cute, cuddly kangaroo your toddler snuggles has been brutally killed, its baby torn from her pouch and pounded until dead—or left to a days-long tortuous death. That is the hate part of the story.

The love part is the many Australian citizens and political leaders who are working tirelessly to end, or at least mitigate the horror of the slaughter. Their initiatives are also global. In addition to pet and human food consumption, these sentient creatures are slaughtered for their leather. Kangaroo ‘byproducts’ are marketed globally—therefore, both domestic and internationally-based activists are working globally to end this horror.

“When humans eat kangaroo meat, they should be aware that the meat is a byproduct of the largest slaughter of land-based mammals anywhere on Earth. Millions of kangaroos are slaughtered every year in Australia, to provide meat for cats, dogs, and humans. Another byproduct of this is, of course, the hundreds of thousands of joeys [baby kangaroos] that are taken from the mother’s pouch and killed every year.” Ken Henry, Chairman, National Australia Bank

I have seen my fair share of documentary films about the slaughter of wild and domestic non-human animals. By virtue of both the content and excellence of its production, the film’s impact on yours truly was particularly devastating. Again, this is not just an Australian story, it is a world-wide story, and we are all accountable.

Knowing the challenges to documentary film viewers of seeing a graphic film, I still state that this is a must-see film. I am not alone. Both Variety and the Los Angeles Times have favorably reviewed Kangaroo: A Love-Hate Story. It is not easy for documentary films to break through that particular media bubble. Additionally, the film qualifies for Oscar consideration. I would love to see it win.