As I’ve written more than once, if a documentary – or a narrative – effectively tells just one story, it is successful. Produced by a San Francisco Bay Area team, The Judge and The General tells many stories. The two primary ones are Augusto Pinochet’s 1973 ascension to power in the South American nation of Chile, 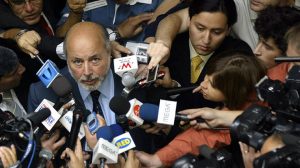 through a U.S.-supported coup d’état. This was followed by his brutal reign which also received U.S. support. The second story follows the judge selected by chance to investigate and prosecute Pinochet and his agents. The many other stories are of victims and their survivors.

Juan Guzmán was born into a wealthy family and aspired to be a diplomat. That aspiration was dashed when Salvador Allende was voted into power in 1970, and proceeded to create a “Marxist” government. Guzmán ended up working as a judge for the state. During the early years of the Pinochet regime Guzmán states that, if he was a lieutenant or captain in the army ordered to shoot Chileans, he would have done so. He rose to the rank of appellate judge.

Judges in Chile are assigned to cases on the basis of rotation. When papers were filed against Pinochet, in 1998, Guzmán’s number was up. He was perceived by some as a ‘right-wing’ judge skeptical of the violence described in the filings. However perceived, he took his job seriously, investigating hundreds of murders throughout Chile, accompanied by body guards and sporting protective gear.

Back at the office, his peers attempted to hinder the investigation. Like the Daniel Ellsberg documentary, The Most Dangerous Man in America, we follow a protagonist’s discovery of horror – including his own culpability. By the time he files indictments against Pinochet, Guzmán is a transformed man.

Available through PBS Home Video, The Judge and The General features absolutely top production values – and Guzmán’s telling of his own story adds gravitas to an already moving and powerful film.