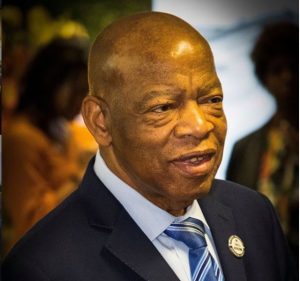 “And I know that if John Lewis as a nineteen, twenty year-old, wasn’t doing what he did, I would not be here today.”
Alexandria Ocasio-Cortez

After reading, seeing, and hearing about the life and work of John Lewis over the past six decades, when his name comes to mind now, or appears anywhere within sight, I automatically add ‘legend’ to his name. The words, sounds, images and stories that emerge from Dawn Porter’s John Lewis: Good Trouble affirm my view of Lewis’s legendary status.

Porter’s film tells Lewis’s biography, and highlights crucial moments in the unending struggle for civil and human rights in the United States. Her film juxtaposes interviews of people who know Lewis—his work and triumphs—with a contemporary interview of Lewis at 80 years of age. The film’s subtitle, ‘Good Trouble,’ is the adjective Lewis uses to describe political activism—initiatives that make for a better world.

The predominant political issue threaded through the film is voting rights—the struggle to counter initiatives to disenfranchise as many American citizens as possible from being able to vote. As I write these words, the attacks on voters and voting are coming fast and furious.

The film opens July 3, in theaters and on-demand.