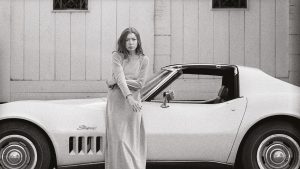 Griffin Dunne’s biographical documentary about his aunt Joan is a bolt of lightning that pierces the heart, gut, and soul. That is how I felt at film’s conclusion as I sat stunned reflecting on the personal challenges and losses prolific writer Joan Didion faced with grace, dignity, and inspiration to write for us her experiences and learning.

In Joan Didion: The Center Will Not Hold Dunne interviews the living legend, and gathers those close to her to provide stories and perspectives on her character, work, and life.

The film’s primary foci are Didion’s writings and her family—husband John Gregory Dunne and daughter Quintana Roo Dunne. John died in 2003, and Quintana in 2005.

The film’s subtitle refers to Didion’s early life experiences. This was at a period of time when she felt “paralyzed by the conviction that writing was an irrelevant act, that the world as I had understood it no longer existed. It was the first time when I had dealt directly and flatly with the evidence of atomization—the proof that things fall apart. If I was to work again at all, it would be necessary for me to come to terms with disorder.”

I immediately thought of the concept of entropy—lack of order or predictability; gradual decline into disorder. I also thought of the Hindu triumvirate of gods: Brahma, creation; Vishnu, preservation; and Shiva, destruction. Didion was addressing Shiva. Obviously, Joan Didion did deal directly with the fall into disorder as evidenced by her cornucopia of magazine articles, essays, books, produced film scripts, and her play, ‘The Year of Magical Thinking’ based upon her book of the same name. The play was produced by Scott Rudin, directed by David Hare, and performed as a one-woman show by Venessa Redgrave.

Yet, we have the subtitle ‘the center will not hold.’ The meaning and implication of those words are up for conjecture. It seems that Didion’s center held throughout her life. Perhaps it is the world’s the title references.

Joan Didion: The Center Will Not Hold engages the viewer from its first moments to the credits. Kudos to Dunne, and, especially, editor Ann Collins.

The film is distributed by Netflix.