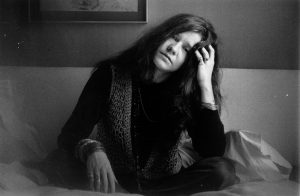 It’s tough. Probably the reason people don’t see ‘em. Documentaries about unhappy subjects—and most of them are about such.

When it comes to the world-changers I admire and respect, and whose passing was untimely, it’s even harder to break through the resistance to seeing their stories, reliving their public lives, pinning for another story their lives could have written—one in which they live and make even greater contributions to our world…, and my soul.

Hollywood’s had her biopic on a far-back burner for years, if not decades. Perhaps it’s a blessing they’ve failed at getting that seed to sprout—I know, a mixed metaphor. It’s a rare biopic that truly captures its subject’s essence in a graceful manner. The documentary format of telling stories offers a greater potential for grace and respect. Producer Alex Gibney’s imprint on a production practically guarantees such a film.

Directed by Amy J. Berg, and produced by the ubiquitous Gibney, Janis Joplin: Little Girl Blue tells Joplin’s story with the above-mentioned virtues as well as the unavoidable cliché. We follow the wounded singer from birth to death, hear from friends, family, and industry admirers. The film points to abuse from high school peers Joplin suffered as the poisonous implant that slayed our heroine. With my psychologist’s brain and 68 years on Earth, I suspect the poison was injected much earlier. But, the timing is irrelevant—theory doesn’t change fact.

I saw Joplin perform at Georgia Tech’s Alexander Memorial Coliseum. It was near the end of her life. She was obviously drunk, and probably on heroine. I felt bad for her, embarrassed for her, but I did not have the character to understand I was witnessing a symptom of unacknowledged and unhealed PTSD. I felt resentment toward her, not compassion.

Yes, for those who love and admire Janis Joplin, who have empathy for her, this is a painful experience—to journey through the highs and lows of a wounded princess. But this film brings us closer to Janis Joplin’s soul, and enriches our souls. We learn or relearn what we lost, and what we gained by her presence in our lives.