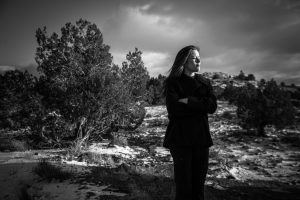 Directed by Mary Mazzio, and narrated by Jessica Chastain, I Am Jane Doe focuses on three children who were ‘trafficked’—that is, raped countless times—and their families in their fight for justice.

The three, of course, represent the countless number of underage girls who have been and are being trafficked. These three are the lucky ones—returned to their families, now part of an incendiary documentary which reveals another gross negligence perpetrated by our system of justice.

Mazzio outlines many years of litigation to stop a website called ‘Backpage’ from publishing advertisements for sex with trafficked girls. The company’s seemingly unbeatable defense is Section 230 of the ironically titled Communications Decency Act of 1996. This statute indemnifies website owners from liability for third-party content on their sites. The vast majority of advertisements for sex with underage children—mostly girls—are on this international site which has generated hundreds of millions of dollars, probably more than a billion by now, of profit.

Mazzio documents the kind of support Backpage has enjoyed. The Center for Democracy and Technology and the Electronic Frontier Foundation both submitted legal briefs supporting Backpage in its cases against J.S. and Jane Doe—two of the three girls featured in the film. She also provides a Google-generated list of companies who contributed to The Center for Democracy and Technology. Funds from these companies were used to support Backpage in its defensive litigation. Here is that list: AT&T, California Healthcare Foundation, Facebook, Google, Inc., Macarthur Foundation, Markel Foundation, Microsoft, Open Society Institute, and Yahoo!

Mazzio’s film follows years of hope and defeat as parents and lawyers fight to have 230 amended. In an exceedingly rare circumstance for documentary films and their makers, I Am Jane Doe was privately screened in Washington, D.C., for members of Congress. As I type, renewed action is taking place to address this unspeakable state of law allowing for the ease of sex traffickers in plying their horrific trade.

I am fascinated. Would thinly-veiled ads for contract killings be acceptable? Probably not. Why are advertisements for the raping of children acceptable to so many federally elected politicians? to so many judges?

I Am Jane Doe is available from iTunes, Vimeo, Google Play, Amazon, Netflix, and DVD.