“Retreating from the cacophony of the world is stepping towards everything that’s essential.” Pico Iyer 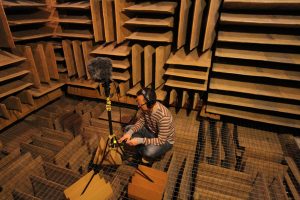 Produced, directed, and shot by Patrick Shen, In Pursuit of Silence is a masterpiece of documentary filmmaking. The film explores the psychological, social, and health impacts of sound, noise, and silence. Lessons learned about the grace, virtue, and power of silence—as well as solitude—inform every aspect of the film.

From the first few moments it becomes clear that In Pursuit of Silence is, in part, a meditation. Peppered throughout we hear from a variety of people speaking with insight and wisdom about our world of sounds and noise, and the critical role silence and solitude play for the individual and our social fabrics.

I felt encouraged when I learned about the work of Quiet Mark which tests and helps design equipment that operates with as little sound as possible. I was both not surprised and somewhat humored to learn of the work of The Association of Nature and Forest Therapy which, as the name suggests, promotes the practice of forest therapy.

Shen’s cinematography is stunning. Alex Lu’s gently captivating music draws viewers into the meditation. By virtue of its visual and aural power, In Pursuit of Silence invites multiple viewings. I imagined watching with sound only, and then watching with vision only. In any case, it will be watched many more times.

Consult the film’s website to find your way to the film.