I’m Dangerous with Love accomplishes all that a standard-bearing documentary should. Michel Negroponte‘s film takes us to places we’ve never been, provides information we’ve never known, and tells the Hero’s story of Dimitri Mugianis. 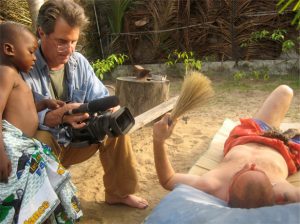 Negroponte takes us to New York and Canada. Yes, I know, plenty of people have been to those places. But have those people been to an illegal ibogaine treatment for a heroin addict? Which addresses my second point: How many people have ever heard of an illegal ibogaine treatment for heroin addiction? My third point deserves a bit more gravity. Dimitri Mugianis.

It’s rare – and serendipitous, for filmmaker and viewer alike – to find a documentary with a narrative which includes an authentic character arc. That’s just what Negroponte captured.

Mugianis: A singer of some kind of rough version of rock. An addict who used heavily for a long time. He found someone who treated his addiction with one treatment with a West African substance called ibogaine. He was liberated from his addiction, but minus the usual heroin withdrawal symptoms.

Mugianis is blessed with the Wounded Healer archetype. By the end of the film our Hero still looks the same, speaks his usual street language, sounds the same, and still sings in his band. But he is truly transformed, and I was truly transfixed.