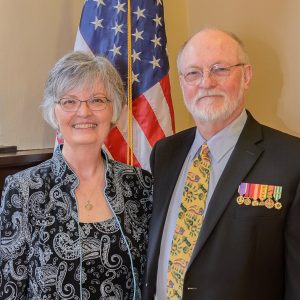 “The thing I needed most from him which was the talking and feeling, was the thing he needed least. He came back from the war, and he’s sitting right beside me, but he’s not really there.”
Anne Jackson

In 2011 Ken Rodgers and Betty Rodgers gave us their feature documentary ‘Bravo! Common Men, Uncommon Valor’ about a Viet Nam battle called Siege of Khe Sanh. The couple emphasized that this film was neither a pro-war nor an anti-war film—instead, it simply presented just what happened. I had the harrowing pleasure of seeing an early screening of the film at George Lucas’s Skywalker Ranch, and the honor of meeting the two filmmakers.

Ten years later, in 2021, they have given us another well-crafted documentary, I Married the War about Post Traumatic Stress Disorder (PTSD) and related disorders that military warriors suffer the rest of their post-war lives, and the impact these disorders have on veterans’ wives. Betty Rodgers interviews 11 wives of combat veterans from World War II through present day Middle East wars.

We learn the phrase ‘secondary PTSD’—the trauma wives experience and suffer from the existential loss of their husbands. As I viewed and listened to the wives tell their stories, I came to sense that ‘secondary’ is too small of a descriptor. Yet, as I listened, I also experienced the love, care, and dearness the wives bring to their wounded husbands.

I Married the War reveals another previously hidden fact-of-life about the impacts of war. The film honors these wives who suffer deeply, yet find the love needed for their spouses. The two filmmakers have done more than make a film. They have drawn attention to a heart-breaking problem, and are calling for much more support for spouses of combat veterans.

There are more than 5.5 million ‘military caregivers’ in the United States helping physically and mentally wounded veterans. The film’s website includes a Resource Page for spouses that will expand as new resources are discovered.