“Carbon Emissions Haven’t Been This High Since The Dinosaurs” screams the headline of a feature story in today’s Huffington Post. The statement derives from a study funded by the prestigious National Science Foundation.

This is the context within which I put on and watched this brilliant documentary about the origins of Greenpeace International. 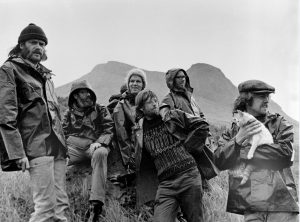 The film follows the international organization from a small group of friends in Vancouver, B.C. mounting a seemingly Quixotic attempt to stop the United States from conducting an underground nuclear test on an island off the coast of Alaska. I write ‘seemingly’ above because their failed attempt inspired and evoked strong public support for the cause of a nuclear-free environment.

Lances pointed downward to the sea, the dejected activists returned to the British Columbia shore heroes. Greenpeace was born.

Directed by Jerry Rothwell, How to Change the World follows this almost magical birth story of Greenpeace. Like a garage band suddenly thrust into music’s limelight, the friends struggle with a myriad of complicated, painful decisions regarding leadership, strategies, tactics, and organizational structure—or lack of same.

Rothwell and company weave archival footage with contemporary interviews of many of the earliest players. The central character is Robert Hunter. The reluctant leader passed away before production. Actor Barry Pepper voices Hunter’s written words.

How to Change the World is a powerful documentary which deserves a large audience. Potential viewers are cautioned that the film includes the inevitable, requisite footage of the whale and seal hunts Greenpeace activists struggled mightily to stop.

It is not clear that we will recover from our cooking of the Earth’s ecosphere. Whether or not their missions are ultimately Quixotic, environmental organizations and documentaries about issues that impact our ecosphere need our support. It is in that spirit of support and participation that I suggest you see this film.

How to Change the World is available from its distributor, Kino Lorber.