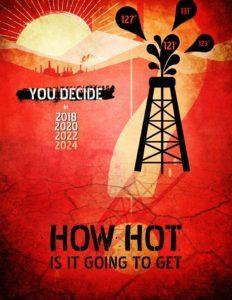 How Hot Is It Going to Get? is two movies in one: An expertly produced primer on human-caused global warming, and a plea for young people of the United States to vote Democratic every two years. The implicit assumption is a Democratically-driven government would take meaningful, effective steps to reduce the inevitable damage that global warming is causing and will continue to cause.

One point repeated in Michael Allen’s film is about the names we give in measures of temperatures—Fahrenheit versus Celsius. In media reports of climate issues, when predictions of temperature change in Celsius are provided, those numbers are much smaller than equivalent Fahrenheit measures. Another assumption the film makes is that if climate change information were provided in Fahrenheit, more people in the United States would pay more attention to global warming.

At this time, under Republican control, the United States is increasing its burning of fossil fuels. Can this film make a difference? Will young people vote? Will they be denied if they attempt to do so?

In any case, How Hot Is It Going to Get? is another absolute must-see environmental film—for people of all ages.

A Glimmer of Hope: The Democrats won the house with several history-making wins. The Republicans had gains in the Senate.