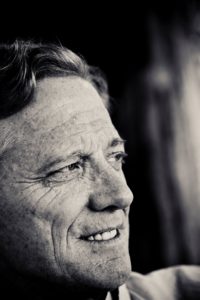 HAPPENING is James Redford’s most personal film, and I mean that literally. The veteran filmmaker hosts and narrates his journeys across America, and includes his daughter and wife in the story.

Redford is making a point. Renewable energy is happening—rapidly.

He visits a variety of clean energy sources—from the very small to the enormous—speaking with their representatives, learning about the current state-of-the-art in providing renewable energy to the world. There are two over-arching forces of change at work: The need to reduce pollution and global warming, and the positive economic impacts of renewable energies.

The film’s highest drama is in Las Vegas, Nevada, where a very large group of citizens petition the state’s decision to end financial incentives to install solar panels for homes and businesses. Redford and future American President Mark Ruffalo present at this standing-room-only meeting. Countless other petitioners are in front of the building.

The petitioners’ arguments to reverse this damaging decision are incontrovertible. Yet, said arguments fall on deaf ears and cannot sway the pre-purchased ‘no’ votes of the three public utilities board members who are not there in person, but with seemingly dead faces, appear only on a large video screen. The promising, nascent solar power industry is virtually killed. That, however, is not the end of the story.

I am grateful for, and have learned from each and every film Redford has shared—and this one is no exception.

HAPPENING is an HBO documentary film.