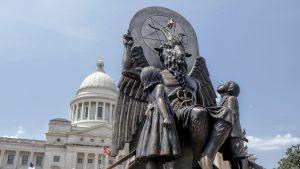 “What we want to do is force people to evaluate their notions of the United States being a Christian nation. It’s not. We are a secular nation. We’re supposed to be a democratic, pluralistic nation. We are supposed to be a nation that doesn’t allow the government to dictate what is appropriate religious expression.” ‘Lucien Greaves’—Spokesperson, The Satanic Temple

The Satanic Temple has chapters around the world, and the only figure I found in my search for the number of total members was 50,000. Chapter members provide a variety of social and environmental services.

Lane interviews a large number of members, and follows several of TST’s public presentations. The issue of Arkansas’ ‘Ten Commandments Monument’ which is placed on the State’s capital grounds garners the most attention in the film’s coverage. To mock the ignoring of the fundamental Constitutional dictum of the separation of church and state, Greave’s led the creation of a statue of Baphomet, and litigated in Federal court to have that statue placed next to the Monument.

(Pictured: Baphomet monument in front of the state capitol building for one day during a Satanic Temple rally in Little Rock, Arkansas)