“My hope is that we miraculously produce a generation of young I.F. Stones. We need to stop keeping up with the Kardashians, and start going back and catching up on I.F. Stone.” Jeremy Scahill 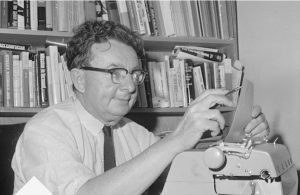 “There’s only two types of reporters. There’s those who care, and those who don’t. Most of them don’t care. But, if you care, if you are, as I was, in El Salvador, or Gaza, or Sarajevo, then you are immediately branded as political. Because if you care, you can’t lie to cover up oppression, atrocity, genocide. And, I.F. Stone cared.” Chris Hedges

All Governments Lie is an homage to pioneering independent journalist Isidor Feinstein Stone—a.k.a. I.F. Stone, a.k.a. Izzy—who set a template for generations of independent journalists. Stone shared his groundbreaking work via his I.F. Stone Weekly. All the contemporary journalists who appear in this film are inspired by Stone’s work. Director Fred Peabody and his production team subscribed to his publication in their teens. Albert Einstein was a subscriber. Marilyn Monroe was an early subscriber to I.F. Stone Weekly. She reportedly bought subscriptions for every member of Congress.

Sixteen journalists are profiled in the film. The list includes Matt Taibbi, Desmond Cole, Jeremy Scahill, Carl Bernstein, Michael Moore, Ana Kasparian, Glenn Greenwald, Cenk Uygur, Amy Goodman, and John Carlos Frey. Scenes from “Crossing the Line at the Border: Dying to Get Back”—an episode from the PBS-distributed series, ‘Need to Know’—about migrant deaths at the U.S./Mexican border are woven throughout the film. The episode serves as a prime example of a virtually censored story. Frey worked on this episode, and speaks about it in his interview.

The focus of All Governments Lie, however, is not the massive number of crucial stories and information kept from the public’s view, but the journalists who tirelessly—and many times at great risk—find and report these otherwise censored stories. To state the utterly obvious, this film cannot be more timely.

All Governments Lie has been picked up for distribution by First Run Features. It is as important a documentary film as I have ever seen.