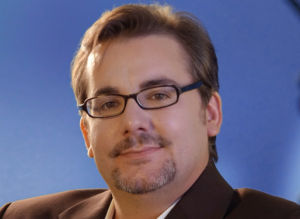 Prologue: Self-taught documentary filmmaker Eric Merola makes films about health and disease. ‘The God Cells’—his latest—is about the therapeutic use of ‘fetal stem cells.’ That phrase instantly evokes the controversy regarding women’s reproductive rights. Humanity will take this passionate disagreement over a woman’s right to choose to its collective grave. This review acknowledges this contentious subject, eschews discussion of same, and addresses directly the film’s subject.
___________________

In The God Cells Merola takes the viewer on his own journey of discovery about how fetal stem cells are already helping people suffering from debilitating, life-threatening illnesses—and, more significantly, about the potential these cells have to help sufferers around the world. His revelatory journey leads to Kiev, the capitol of Ukraine, where EmCell is located. This treatment center offers the most advanced, refined fetal stem cell therapy currently available.

Merola interviews patients, family and friends along with authorities and healthcare practitioners. The filmmaker is also a subject of his own film—he goes through a comprehensive rejuvenation treatment at EmCell, and takes us along for the ride. Needles notwithstanding, the treatment and its promises are inviting. Yours truly is ready for his journey to Kiev.

Merola points out that not all stem cells are the same, and that fetal stem cells have been found to be the safest and most effective at treating illnesses—and, as mentioned above, consequently a seemingly permanent lighting rod of controversy. He also states the obvious: Not a drug, not patent-able (yet), the use of fetal stem cells as a treatment threatens conventional medicine—especially Big Pharma which, with its billions of dollars, and with the assistance of Pro-life supporters, will quash the use of fetal stem cell therapy in the United States as much as it can, as long as it can.

Hope springs eternal. There are initiatives the most promising of which is the California Institute of Regenerative Medicine which stands ready to move forward with research and advocacy if and when there is a reformation of deep economic and political forces in the United States.

The God Cells is a stunning, compelling, riveting film that covers a healthcare game-changing treatment which holds immeasurable potential for the health and well-being of human and nonhuman animals. From beginning to end, the documentary challenges its viewers’ beliefs and values. Merola has given an invaluable gift to our world—especially the people of the United States. The more people who unwrap this gift, the better off our world will be.

Many thanks to Julia Schopick, author of Honest Medicine, for insisting I view Eric Merola’s film. I would never have seen it, let alone learn of his many contributions if not for Julia.